The history of the Russian breed can be divided into two periods.

The first period  occurred in the existence of the Toja in Russia in its original form, which was characteristic of the breed in the late XIX – early XX centuries. The second period is the work on creating the breed in the USSR.

The earliest history goes back to the Manchester Terrier, which was the fruit of the blood flow of the English greyhound, the greyhound and the whippet to the Old English black and tan terrier. This caused the birth of dwarfs in the litters of the Manchester. These dwarfs gave rise to a miniature breed of English Toy Terrier .

The first evidence of the presence of British terriers in Russia can be seen in the Zoological Museum of St. Petersburg. Here at the stand exhibits Kunstkamery period 1716-1725 gg. presented an effigy of a smooth-haired terrier with a height at the withers of approximately 35 cm. The caption under the exhibit reads: “A dog of a smooth-haired terrier breed nicknamed Lisette. It belonged personally to Peter the Great. ”

English Toy Terriers in Russia became famous due to the fashion for everything English. Tiny sizes, elegance of build, mobility and a lifelike unflattering disposition made them popular saloon dogs.

In 1917 Petrograd published a book of A. Fedorovich-Shenets with a very detailed description of not only hunting and guard dogs, but also indoor. 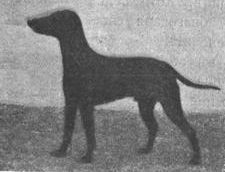 Terriers (from the word terrier earthy) is a special breed of dogs possessing a passion for hunting animals lurking in burrows. There are quite a lot of terrier breeds. The ancestor of them is the black and murugial terrier ( black and tan terrier). This breed is distinguished by its gracefulness, quickness and ease of movement. At present, they are not used for hunting, but are kept exclusively as indoor dogs, as they are very beautiful and devoted to their master. Small black-shrouded terriere are called dwarf or terriere (toy – toy). Both these breeds in all represent a complete similarity, except for growth. Distinctive features are as follows. The skull is flat; muzzle straight, sharp, with tightly fitting skin; eyes small, shiny, dark; nose completely black; the ears are small, high-seated and protruding upward (usually circumcised at an acute angle); tail is rather short and thin, (not chopped off); wool is short, shiny, not soft; the color black and murugi ( tan), i.e. average between dark red and dark brown. Murugic tan marks are on the eyes, on the muzzle, on the paws and on the underside of the tail …

In addition to this edition, about the terriers the same description is repeated almost the same in V. I. Kapitanov’s book “Watchmen, Hunting and Indoor Dogs. (Education, feeding, maintenance, training, initial assistance in cases of disease and description of signs of different breeds.) “. As an illustration, there is a drawing of house dogs, among them “black and murugial dwarf terrier”. 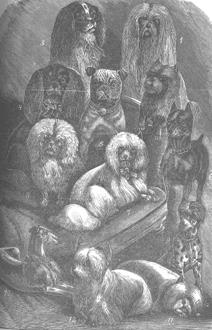 By the beginning of the twentieth century, the number of English toy terriers in Russia had grown significantly. They were called “that terrier” or “Black and Tent Terrier”, and larger representatives of the Black and the Terrier. In May 1907, 46 indoor dogs of various breeds were exhibited at the exhibition in St. Petersburg, 11 of them were toy terriers. The fact that this is exactly the toy terriers, and not the levreets or pinschers, is proved by the fact that in the catalog published for the exhibition each breeder was listed. For example, under No. 801 there was a pygmy pinscher, under No. 808 chihuahueno, named here “Mexican that pug”, No. 821 and 822 – white English terriers, by that time a very rare breed even at home.

The revolution of 1917 significantly reduced the number of toy houses in Russia, but did not completely destroy them. It was easier to save a small dog than a large pedigree animal, so in the pre-war period the terriers remained in different cities. For example, at the exhibition on December 15-17, 1923, two toy houses and one Manchester took part in Moscow, and in 1924 in Odessa three medias were awarded with medals, two in Vitebsk, and one in Poltava.

After the Great Patriotic War, these dogs were almost lost. At the Leningrad exhibition in 1947 they showed only one toy. The breeding of the toy terriers in the clubs was suspended, the advantage was given to the breeding of dogs that were in demand for military purposes.

But even being expelled from the “official” cynology, the breed continued to exist thanks to the love and enthusiasm of a number of breeders. Active searches for the surviving dogs began. Most were of unknown origin, often unclean, at best – crossbreeds. It was necessary to accumulate the information of pedigrees of documents anew. Import of toy terriers from England was impossible.

With difficulty, the collected livestock was diverse. Breeders selected dogs by size, selected approximately similar manufacturers, seeking to unify the type. In 1967, at the 2nd All-Union Exhibition, 100 Toy Terriers of the Russified type were exhibited. Restoration of the breed went simultaneously in Moscow, Leningrad, Sverdlovsk, Irkutsk.

Until the mid-1950s, almost nothing was written about decorative rocks. Only in several catalogs with exhibitions of dogs, mainly hunting and service breeds, there are references to indoor dogs. In 1954 in the book of A.P. Mazovera “Tribal business in official dog breeding” as an example of a gentle type of constitution is a photograph of that Terrier of Amy.

In 1960, the “Catalog of the All-Russian Exhibition of Hunting Dogs, Weapons, Hunting and Fishing Equipment” published “Temporary standards of breeds of indoor and decorative dogs”. Among them is the “Toy Terrier”. This first description of the breed was in fact the first standard. According to this standard, 34 males and 43 females of the toy-terrier were examined at the exhibition. Almost all dogs are black and tan, one is dark brown and the color of two dogs is not specified. 11 dogs were rated “excellent”, 32 “very good”, 11 “good.”

The Soviet standard of “toy-terrier” did not match with English. In particular, the growth was required not more than 25 cm in males and not more than 23 cm in bitches, the skull was stipulated to be rounded, with a pronounced transition, the tail was short-cut, along with black and tan, new colors were allowed: brown-tan, red of any shade. So political isolation in the country led to the fact that the Soviet Union formed its own, self-styled Russian toy terrier, significantly different from its English counterpart.

In the midst of working on the breed in 1957, the light appeared a long-haired puppy Chiki. The mother of this dog had several elongated wool, and information about its origin was absent. When the puppy grew (2.5 kg), then the length and beauty of the wool coat was surpassed by the mother. He had richly eared ears, there were feathers on the back of the limbs, an elongated coat on the body. The color was black and tan.

In the midst of working on the breed in 1957, the light appeared a long-haired puppy Chiki. The mother of this dog had several elongated wool, and information about its origin was absent. When the puppy grew (2.5 kg), then the length and beauty of the wool coat was surpassed by the mother. He had richly eared ears, there were feathers on the back of the limbs, an elongated coat on the body. The color was black and tan.

The effective appearance of the dog was decided to be fixed in the offspring. The work was led by the Moscow cynologist Ye.Zharova. In the pair Chiki also picked up a black-tan female with a type of wool, reminiscent of his mother’s coat. The experiment was a success – three long-haired puppies appeared. Breeding was established, and soon the breeders became owners of a small number of long-haired toy terriers. Presumably they were infused with old-type Pekingese or dogs, close in type to the Chihuahua. This gave positive results in fixing the long-haired and accentuating the specific structure of the fur on the ears and strips. In 1966, the first standard of the Moscow long-haired toy terrier was written, and long-haired toes were planted in other cities of the Soviet Union.

In 1972 in May at the 7th Moscow exhibition of decorative dogs the description of the toy terrier was printed with some changes. At the exhibition 28 male dogs and 59 females of that-terrier were presented. 68 dogs of black and tan color, 4 black, 2 brown-tan, 9 brown, 1 pale, 1 deer, 2 red dogs. There are also long-haired toy terriers. 11 males, 24 females. Color: 16 dogs black and tan, 2 black, 12 brown, 4 red, 1 red with a dark touch.

According to these two standards, the breed at one time developed independently of each other.

In the 80’s. with the fall of the “Iron Curtain” and the beginning of active importation of dogs of rare and exotic for Russia breeds, interest in the domestic breed fell. By the beginning of the 1990s, the number of toy terriers had greatly decreased, and the number of the long-haired variety had reached a critical level. But the breed managed to survive. The breeding of the toy terriers was interested in a new young generation of breeders, who were actively involved in the work. In Russia, a modern cynological structure was formed, there was the possibility of the existence of private nurseries, which soon occupied a central place in breeding the breed.

In 1998, RKF approved a new breed standard Russian toy terrier. Within the standard, Russian smooth-haired and Moscow long-haired toy terriers were combined as two varieties of the same breed.

In 1999, the RKF decided to combine both varieties into one breed and name the Russian terrier smooth-haired and long-haired . The joint standard was adopted in 2000. This standard was sent to the FCI for the recognition of the breed, but from the FCI it was suggested to rewrite it according to a new template for newly recognized breeds. In accordance with this template, the standard was rewritten in 2003 and approved by the RKF Tribal Commission.

This website uses cookies to improve your experience while you navigate through the website. Out of these, the cookies that are categorized as necessary are stored on your browser as they are essential for the working of basic functionalities of the website. We also use third-party cookies that help us analyze and understand how you use this website. These cookies will be stored in your browser only with your consent. You also have the option to opt-out of these cookies. But opting out of some of these cookies may affect your browsing experience.
Necessary Siempre activado
Necessary cookies are absolutely essential for the website to function properly. This category only includes cookies that ensures basic functionalities and security features of the website. These cookies do not store any personal information.
Non-necessary
Any cookies that may not be particularly necessary for the website to function and is used specifically to collect user personal data via analytics, ads, other embedded contents are termed as non-necessary cookies. It is mandatory to procure user consent prior to running these cookies on your website.
GUARDAR Y ACEPTAR